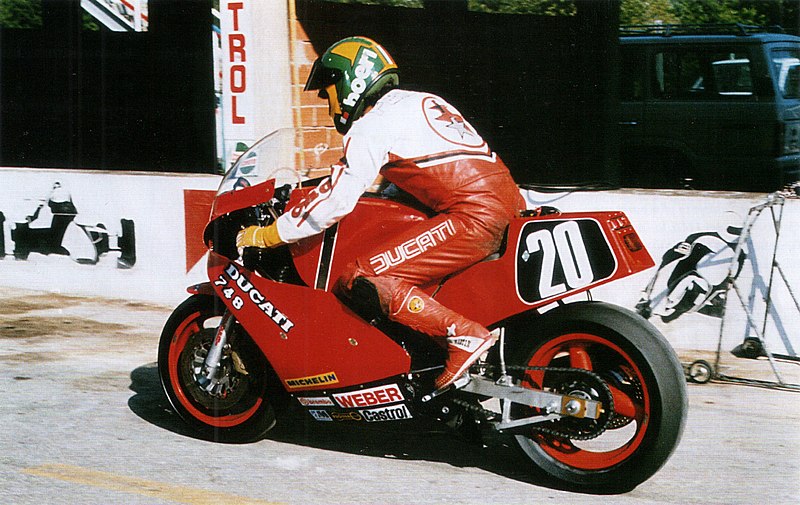 Do you want to know what happened to Virginio Ferrari, the great Italian rider of the 80s? Then stay with us and don’t miss out on this blazing article, Virginio Ferrari: 80s Fever!

Virginio entered the world of motorbikes at the age of 18 when a friend introduced him to a motorbike club in Milan to obtain a pilot’s license.

From there, the rest is history.

The blue patrol and the 500 class world championship

With Graziano Rossi, Lucchinelli, and Uncini he made his way through the 80s with the Italian patrol and became the pride of the motorbike tricolor.

Then, it’s 1979, 500 class world championship: Ferrari is thrown off at great speed and Kenny Roberts wins the title.

Virginio is taken in a hurry to Le Mans hospital, where he is rescued.

1987 is the year of true revenge: riding his Bimota-Yamaha 750, Ferrari becomes the F1 World Champion. He takes home first place at the Grand Prix Hungaroring, Hockenheim, Assen, and the 6 Hours of Monza.

After retirement: Ducati Team Manager and his own company

Virginio retires from racing but does not abandon the world of two wheels.

In 1994 he became Team Manager of the official Ducati team, collecting 43 victories in the Superbike World Championship with riders Chili, Corser, Falappa, Fogarty, Kocinski, and Lucchiari.

Currently, Virginio is, with his company Virginio Ferrari Racing, importer of the MV Agusta, CAGIVA brands in Monaco, and official workshop of MV Agusta, Cagiva, and Ducati.

In short, you never forget your first love!

And what do you think? Did you know all the adventures of Virginio Ferrari? If you liked our article, stick around so you don’t miss out on all the industry news!

Check out our blog!